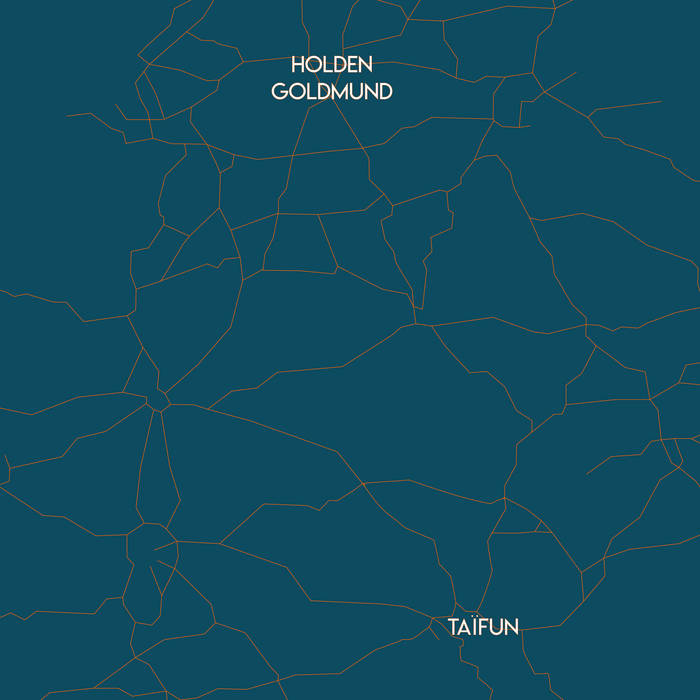 BIO
The guys from Taïfun and Jacco from Holden Goldmund stayed in touch after they met on tour a few years ago. A shared love for the band Motorpsycho made it even more fun to meet each other and have a ‘psychonaut sleepover’ every now and then. This connection eventually resulted in a new split 12″ vinyl release, where three labels join efforts. All this in the old tradition of the split LP: bands, labels and communities joining hands to share a piece of beautiful art and experience together.

Taïfun’s “math with emotion” driven post punk contrast in a unique way with Holden Goldmunds brittle, free-beat power three piece sound. The album was mastered by TJ Lipple, who has been involved with albums of respected bands like Lungfish, Fugazi, Aloha and Medications. The cover design was done by Stéphanie Seutin and the remarkable inner sleeve by Elias Lichtblick. The 180 gram 12″ vinyl package is limited to 100 copies and is distributed in Belgium (Honest House), Germany (Stereo Dasein) and The Netherlands (Tiny Room Records).

Taïfun has been around since 2005, being the first band on the Belgian Honest House record label. The band’s influences range from Les Savvy Fav, Built to Spill and Modest Mouse to Motorpsycho. Live performances are a must: mesmerizing atmosphere, thriving on what and who is there. An unspeakable mix of emotion and skill, it will easily leave you countless and breathless. On their side of this slab of wax they mix post rock with indie and emotion with a sense of coolness, creating an honest, intense atmosphere.

After having been moderately active under the name Holden Goldmund, Jacco van Elst (This Leo Sunrise, The Fire Harvest) realized that performing as a solo artist would never feel totally right. A power three piece band seemed like a great idea to put some more life in songs and ideas that had been lingering on for a while. Jacco got together with drummer Dave Mollen (ex-I am Oak, Howart) and bass player Matthijs Thomassen (Boyle, The Hand) to rehearse.

On a hot Whit Sunday 2018, after experiencing all these weird hickups (like dealing with a producer that never showed or a Volvo car driving over important recording equipment), the trio managed to record their songs for this split live on tape in Studio Arkansas, Utrecht, capturing the same spirit as their heroes The Meat Puppets, Silver Jews, Tropical Fuck Storm, The Modern Lovers, The Feelies, etc.

Recorded and mixed between January and June 2018 by Julien “Mammuth” Conti at Le Verger Studio, Liege, Belgium.
Produced by Taïfun and J. Conti

Recorded on Whitsunday 2018 by Matthijs Thomassen at Arkansas Studio, Utrecht, The Netherlands.
Mixed by Dave Mollen
Produced by Holden Goldmund